In the fall of 2017, the Parents for Education (PFE) organization at Prairie School needed to fill a void in the media center.  A new wall was constructed a few years prior, and the blank canvas was something that students, staff, and parents alike were eager to fill with something beautiful.  The PFE commissioned Century Junior High art teacher Susan Berry to provide a mural that would create a positive and bright atmosphere in the media center, a hub of daily activity in the school.

Leanne Brown, Media Specialist at Prairie, said, “This wall measures about 32 feet wide, so this was no small task. Sue created five unique, timeless canvases to cover the wall, each depicting trees in various seasons.”  The series of five canvases produced by Berry have since been installed on the empty wall. The paintings depict the changing seasons, including fall, early winter, late winter, spring, and summer. Berry spent upwards of 20 hours on each 6’x5’ canvas, with each having its own name and story.

Shades of Change, the first canvas, represents fall.  It symbolizes the change of perspective, the beginning of a new school year, and a glimpse of the future.  Unique Sunrise follows and portrays a crisp December morning.  The picture itself comes from Berry’s own backyard after all the leaves had fallen off the tree behind her house.  The third piece, Snow Day, depicts a frigid February morning after a heavy snowfall.  This piece also includes a small red cardinal that represents Berry’s father who had passed away in February of 2015.  Awesome Blossoms, the fourth painting, is a cherry blossom tree at the peak of spring set against a sunny sky.  The bursts of pink in Awesome Blossoms also represents Berry’s mother, who battled breast cancer in 2010.  The final painting, titled Nirvana, is set in the summertime and represents a calmness after a busy school year, a new beginning, and hope for peace. 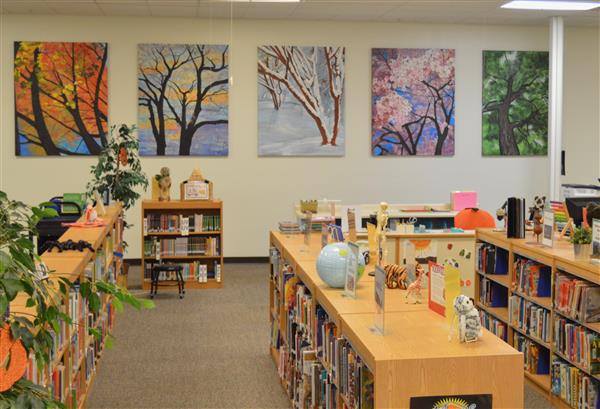 These five paintings will remain as a permanent fixture in Prairie’s media center for students and staff to enjoy for many years to come.